Hidden Space is an ongoing project with the aim to highlight the spatial environments where architecture is used as a tool to detain children and investigate in what way architecture can be used to improve children’s rights.

The estimated number of children detained worldwide within legal systems according to UNICEF (2009). For each child there is a space, generally unknown to the public eye, where architecture becomes a tool for detention and the notion of Freespace does not apply.

The Office of the United Nations High Commissioner for Human Rights (OHCHR) writes that “despite progress in the realization of children’s rights, as set out in the Convention on the Rights of the Child, too many commitments remain unfulfilled. This is particularly true for children deprived of liberty, who often remain invisible and forgotten. Most countries lack data on the number of children deprived of liberty, on the reasons, length and places of detention. Children’s detention may be decided by judicial, administrative or other bodies, including the police, military authorities, immigration officials, child protection or welfare bodies, health professionals, and non-state actors, including in situations of armed conflict.

Countless children are placed in inhuman conditions and in adult facilities, where they are at high risk of violence, rape and sexual assault, including acts of torture and cruel, inhuman or degrading treatment or punishment. Children are being detained at a younger and younger age, and held for longer periods of time. The personal cost to these children is immeasurable in terms of the destructive impact on their development, and on their ability to lead healthy and constructive lives in their societies”. (Children Deprived of Liberty – The United Nations Global Study, OHCHR)

The project is based on the feedback that Sweden received in 2015 from The Committee on the Rights of the Child (CRC) as a tool to examine the relationship between child rights and architecture.

Through our research we identified five different environments where children are detained for various reasons: SIS special residential homes for young people (The Swedish National Board of Institutional Care), Custody, Compulsory Psychiatric care, Immigration detention centers and Arrest. Some of the spatial qualities within these environments should not exist in the first place, whilst others are meant to be helpful and caring.

The situation today, however, is often that these spaces seem to be forgotten, down-prioritized and otherwise counteract their original purpose. We call them Hidden Spaces, the title deriving from our research and the impression that people know very little about how they are designed, their purpose or how they are used.

With the Venice Biennale and the theme Freespace as a platform, we embrace the opportunity to highlight these Hidden Spaces to the international architectural community with the hope that more people will engage in these environments and create the generosity and thoughtfulness where it is needed the most.

In September 2018 OHCHR will publish an in-depth global study on children deprived of liberty which will unveil the Hidden Spaces on a global scale. 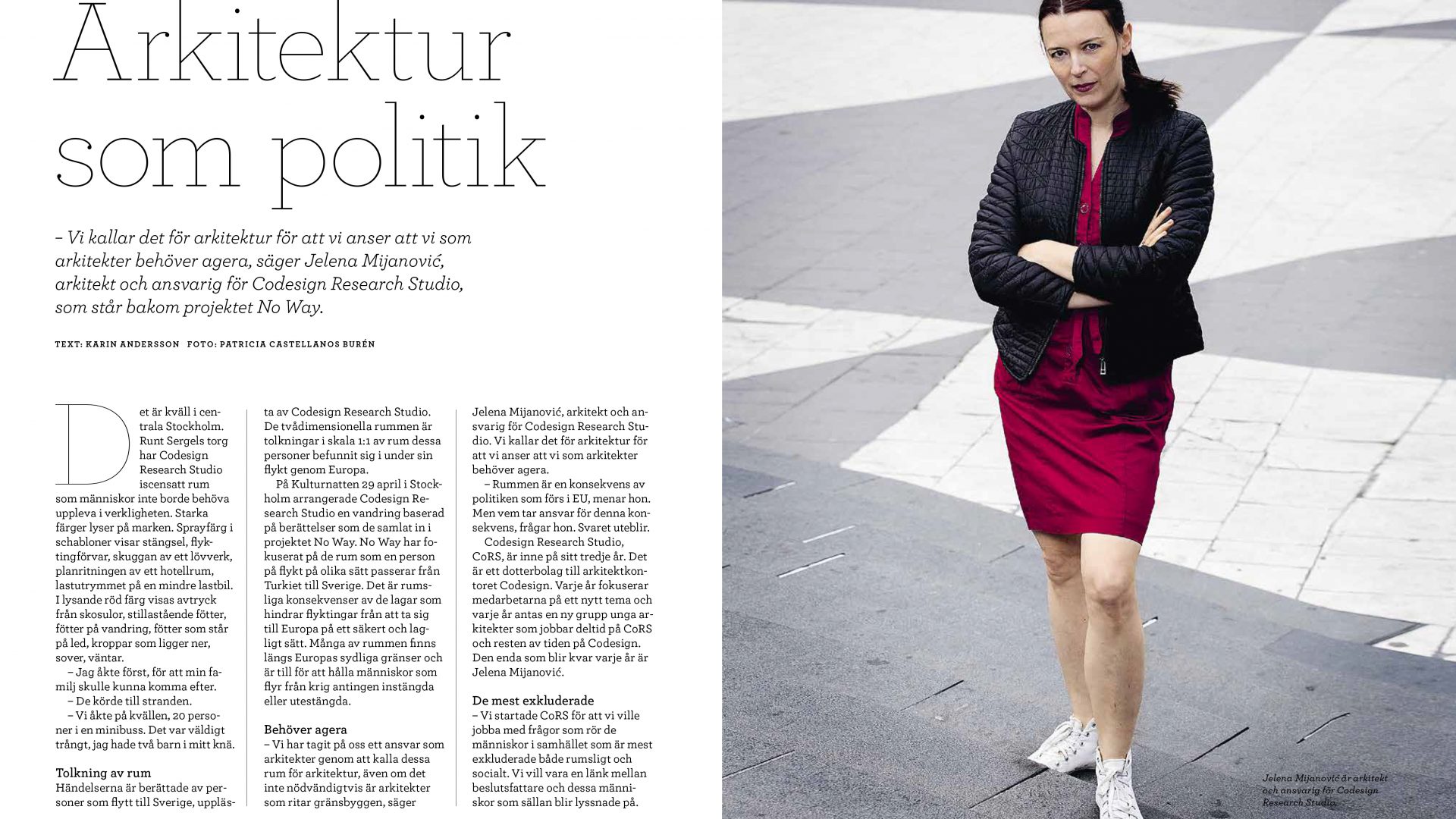 In recent years, war and conflict within Europe’s geographical proximity has led to an increased number of people seeking refuge in Europe.

In order to protect the free mobility within the Schengen area, judicial hinders such as the Carriers Liability, Schengen Visa Policy, the Dublin regulation and the EU Turkey Deal as well as border control have been reinforced, preventing safe passage for people seeking refuge. By closing off safe and legal routes, a far more treacherous journey is forced upon migrants wishing to reach safety in Europe. As a consequence, series of temporary spaces, legal and/or illegal, are being created and transformed.

No Way is based upon interviews with people that have made the journey from the Middle East to Europe to seek refuge. The project exposes the relationship between the formal and the informal routes, and how the spaces along these routes and the time spent in them affect the body and the mind. With the help of an architect’s tools and methods, using architecture as evidence, the aim of our work is to visualize, in two and three dimensions, the spatial, and in the end humanitarian effects of Europe’s migration politics.

To take the discussion about these issues further CoRS arranged a panel talk with renowned participants specialised in law, architecture, criminology, sociology and storytelling. No Way has also been shown as interventions in the public space, as full scale drawings and an audio walk that enabled the visitors to listen to the informants’ stories and relate to different spatial situations along the way.

Contrary to most architects’ wishes to build space, the ultimate goal of No Way is to eliminate spaces, more precisely the harmful spaces that people seeking refuge are exposed to. These spaces need to be replaced by a safe passage into and through Europe. In our strive towards this goal, we have involved asylum lawyer Viktor Banke and sociologist and criminologist Vanessa Barker in our work, adding their knowledge within law, criminology and sociology as a critical filter to our architectural findings. It is our belief that a cross disciplinary approach is necessary to create an understanding of this complex issue. We hope that this method of tackling the subject will shed new light on the consequences of closing the borders of Europe.

In the exhibition Body & Border, Codesign Research Studio (CoRS) questions the purpose and of the new European borders.

With the use of architectural tools and methods, different border typologies are analyzed and deconstructed. Details, shapes, dimensions, proportions, components and compositions are set in relation to the human body. As a visitor you are confronted with drawings in full scale, exposing your own body and its dimensions and shapes to the border architecture.

The built border’s consequences to the human body have been documented through on-site visits, interviews and reports from a doctor in the camp at Miksaliste in Belgrade, Serbia. As a visitor you can experience a few of those individual stories captured in time and space  through 3D models and maps.

CoRS has created a digital 3D database of border architecture, uncovering a new image of Europe’s fortification politics and the economy of migration.

Include Me is an action by Codesign Research Studio performed at the opening of the Venice Biennale, on the 26th and 27th of May 2016.

The aim of the action is to raise the question of inclusion or exclusion in architecture, at the Venice Biennale and in the EU. Who makes decisions about who should- and who should not be included? Who takes responsibility for the consequences of exclusion of people?

Include Me is a part of a larger research project, Body & Border, where Codesign Research Studio analyses the purpose and consequences of Europe’s new border architecture.

Codesign Research Studio (CoRS), is a non-profit subsidiary of Codesign architectural bureau. CoRS operates at the intersection of theory and action, bridging the gap between academic research and professional practice. Through self-initiated, independent studies, CoRS seeks to identify areas of spatial friction between users and decision makers, proposing solutions that bring the two groups closer to each other. CoRS uses an architect’s tools and methods in exploring questions of architecture as a means of controlling spatial exclusion and inclusion of people, thus also questioning the role and responsibility of the architect. 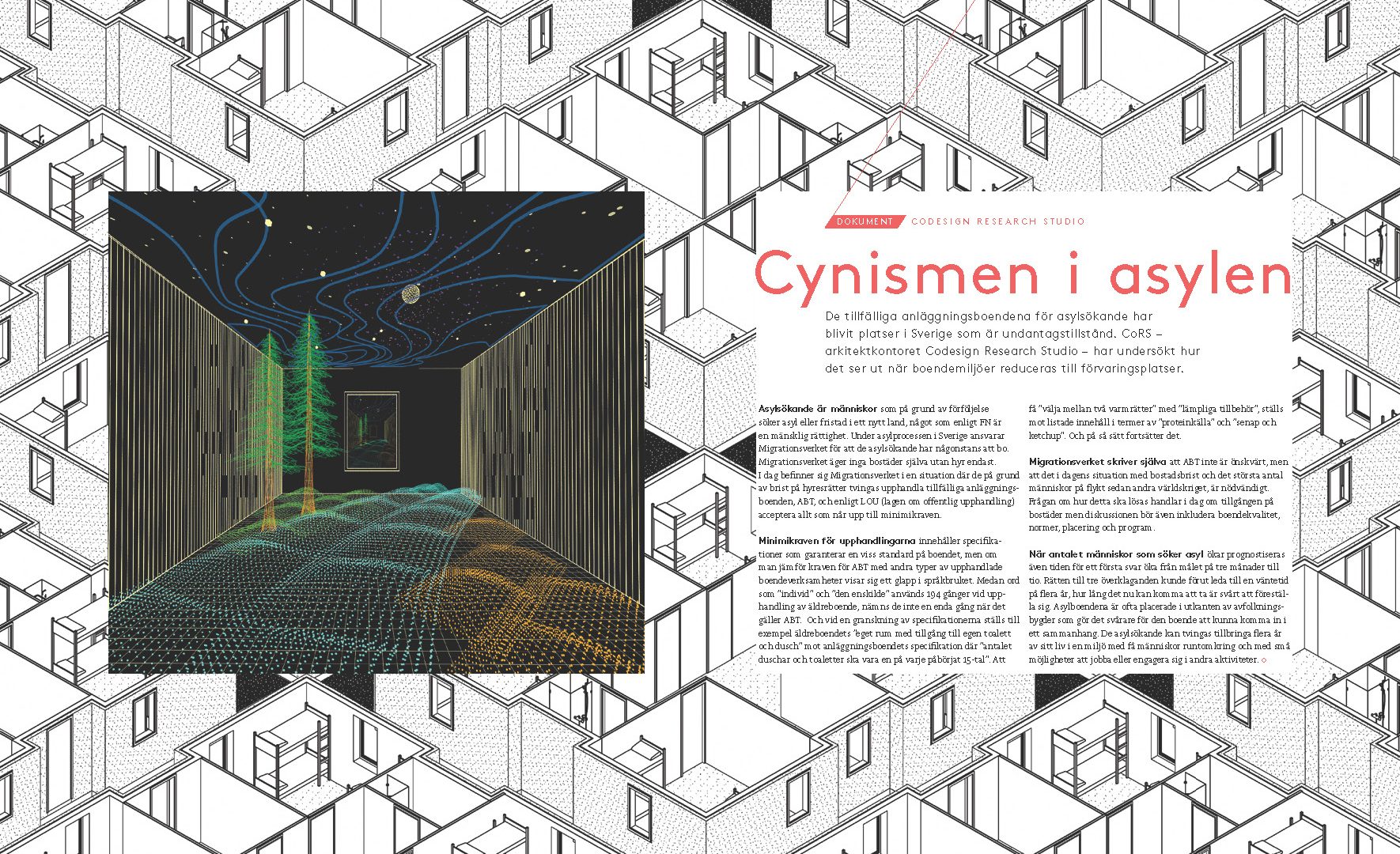